Happy New Year!  We are back to blogging here on Super Mighty Max dot com.
As we gear up for the Inauguration tomorrow of Donald J. Trump as the 45th President of the United States of America, his cabinet members are getting grilled by Democratic Senators during their confirmation hearings.  Over the last few days we have watched the Secretary of Education nominee Betsy Devos, a multi billionaire Republican philanthropist, completely avoid questions on around guns in public schools, higher education, and the federal student loan programs.  She even made a comment that guns are needed in schools to keep the grizzlies away.  What grizzly bears do you know own guns?  Anyway, I digress.

What infuriated me as a Special Needs mom to Super Mighty Max was her response to questions around Special Education and lack of knowledge of existing acts like the federal Individuals with Disability Education Act or IDEA.  This act has governed special education in public schools since the mid-1970s to not exclude those with special needs and disabilities from getting a public education.

VA Democratic Senator Tim Kaine asked Ms. DeVos whether schools that receive tax dollars should be require to meet the requirements of IDEA.

“I think that is a matter that’s best left to the states,” Ms. DeVos replied.

Mr. Kaine came back: “So some states might be good to kids with disabilities, and other states might not be so good, and then what? People can just move around the country if they don’t like how their kids are being treated?”

Ms. DeVos repeated, “I think that is an issue that’s best left to the states.”

Secretary of Education nominee Besty Devos is a threat to the Special Needs Community because she does not know what the IDEA is and how this federal program has helped kids with disabilities since the 1970s.  Betsy Devos is inadequate, not knowledgeable of basic education policies and programs, and has no experience in education.  The sad part is with a Republican majority Senate she will likely be confirmed.

Special Needs parents we need to continue to fight and be advocates for our children at all costs. 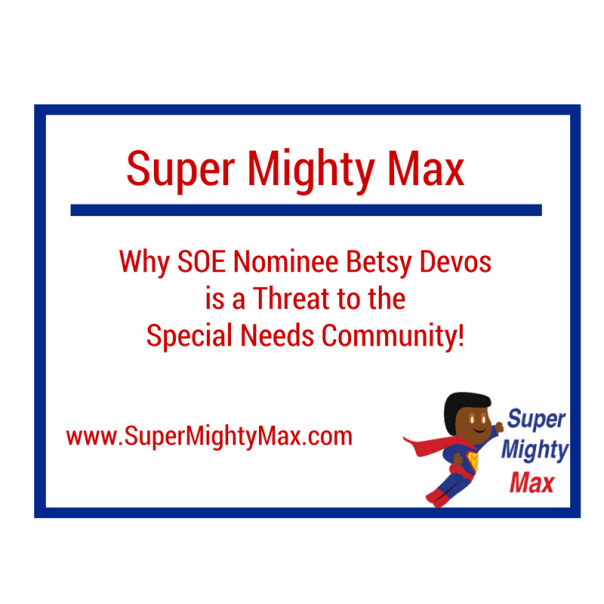 It’s been exactly one year since Super Mighty Max was diagnosed with Spastic Quadrapelgic Cerebral Palsy.  This diagnosis initially devastated us as we grieved that our son may not have a “normal” life and may not crawl, walk, talk, or live the life that we expected him to.   But now a year later I can truly say that disability is everywhere and it’s truly a blessing. 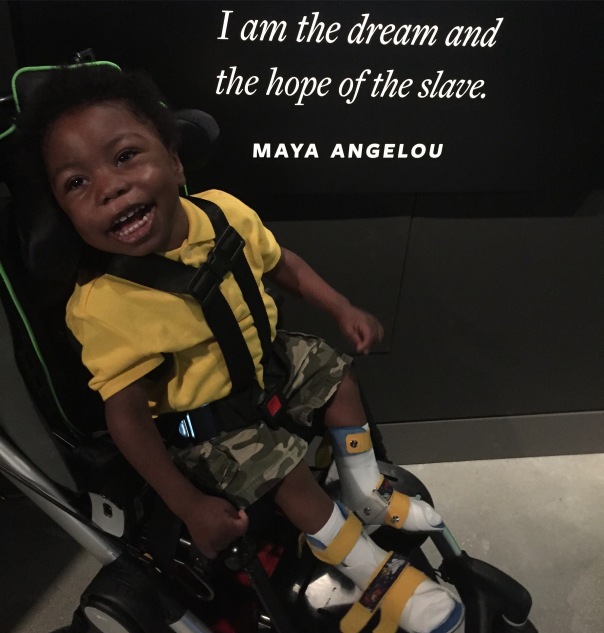 This past weekend we successfully travelled out of town with Super Mighty Max the first time (we travelled longer than 3 hrs with him) this year, and ventured to DC to visit family.  My father in love was able to get us tickets to the sold out online newly opened Smithsonian National African American Museum of History and Culture #naamhc (the museum is free by the way you just need tickets to get in).

So, we packed Super Mighty Max up and ventured out to DC to spend a few hours in the museum to show him our history, and to not limit sharing experiences with him.  I snapped (@shareericaworld) the entire experience and it’s below.

​
During our time at the museum, I saw other families with kids with disabilities and other adults who were wheelchair bound.  I love my people because they loved on my son like no other.  They came up to him, smiled at him, held his hand, talked to him, asked about him and his age, and made me feel proud as his mom.  They made me feel like Super Mighty Max’s disability is a blessing, that his little light just was shining bright, and his smile was ministering to others.  He truly enjoyed being strolled around the museum and seeing the lights, music, and sound of people.

​​
The NAAMHC is a must see in DC, I would recommend going during the week to avoid long lines and not being able to freely walk and see exhibits.  Overall a positive experience for our family and up next on the family agenda is Disney on Ice!

Disability is everywhere around us and it definitely is a blessing no matter the ability of the individual!